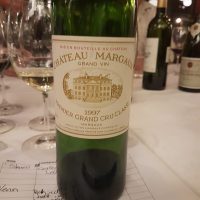 Sitting warm and dry at Matteo’s on a miserable winters night. Outside it is pouring with rain, so much so that I begged to be driven instead of taking my normal course on the the train. A lot of effort to drink wine from a bad vintage right?

While the rain lashes outside, creating a steady rumble on the roof. The ritual has to be observed. Every second month, our group of wine taster, friends, gather to enjoy the best wines of the old world and to learn something about wine. For 13 years I’ve been doing this and yet I still discover facts about wine I did not know.

After 13 years I still find wines that make me smile and wriggle in my seat like my three year old when he is getting a treat.

This is one of the special nights. When we bring a wine from our cellar. It must be 10 years old, classic in style and from the Old World. Each in the group brings the best wine they can. Everyone is very generous without a hint of one-upmanship. Consequently we’ve drunk some very lovely wines.

Occasionally someone does something awful/awesome

And brings a wine so controversial that if we were to know it in advance we would almost certainly veto it. But ah, the glories of tasting blind. We can only enjoy the wine in the glass in front of us. And so it was that the wine of the night was clearly Chateau Margaux 1st Growth 1997.

I sat at Ma 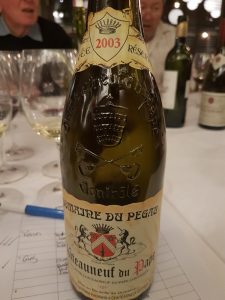 tteo’s and tried Bordeaux wines from 1997. They were dire. The best had redeeming features for drinking but the prices were so horrendous that I could not in good conscience sell them to anyone.

The wine in the glass in front of me was unmistakably Bordeaux. But I could not have picked the wine in the glass as a 1997. It tasted of a good vintage or a great producer from an OK year. But 1997? Who would bring such a bad wine to a dinner such as we were at? And yet, here we were, in the right context, drinking a wine at it’s correct age and we were enjoying it for what it was. And there was nothing dire to be found in the wine. If you’d buried you 1997s hoping for a miracle, it may have happened. I’d still be circumspect about buying 1997s, having tasted a sample of one. I would want to taste a lot more before I was won over. If anyone has more Margaux 1997 they are at peak drinking. Especially when I am in the room drinking it too #winefact.

But there was another.

Domaine du Pegau Chateauneuf du Pape Cuvee Reservee 2003. Now 2003 was not a disaster. It was hot all over the world, consequently there was a lot of atypical, rich and forward wines. Not to my palate and one I avoided for my cellar selections. Tasting this wine it did seem like a warmer vintage. Intensity with bold flavours, but there was a depth. A hauntingly beautiful perfume and layer after layer unfolding. It was not from a disastrously hot vintage. Oh wait, yes it was….

I admit that I went home to look to see if I could buy either or both wines because they were just that good.

What did I (re)learn at dinner?