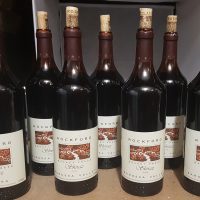 Thursday was a cold Autumn day in Melbourne. Business as usual, but perfect for what was planned in the evening; a dinner showcasing the best Shiraz in Australia, Rockford Basket Press Shiraz. For my own enjoyment, I’ve been collecting Basket Press since at least 2000 vintage. But what do you do with seven or eight vintages of the same wine? To drink them all separately would seem to be a waste, if they could be served together as one event. That would mean sharing them with people though, and as an only child sharing is actually not really something I’m able to do.

Mostly because it tastes amazing. Especially if you let it mature in bottle. My happy time for BP is 15 years. The wines are always dense, complex and free of overt use of winemaker artefact. There is oak, but it is not the top billing of the flavour profile. There is power, but it is balanced by the structure. The fruit is sourced from 60-140 year old vines in selected sub-regions of the Barossa. The blend is assembled so that each year the wine reflects the Rockford style, but is also true to the vintage. I don’t drink a lot of wine from the Barossa, but I’ll always make time for Rockford. 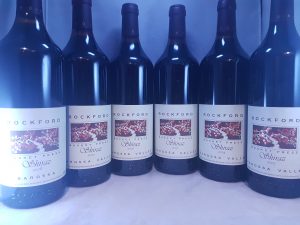 As a true wine lover, the opportunity of an amazing experience won the day. And I do believe there are not great wines unless someone else was there to witness them. It was settled, a dinner with a six vintage vertical was the way forward. How often are you going to experience six consecutive vintages of any wine?

The bigger problem was how many people? These are all from my cellar and I want to be able to enjoy them. See them open up and evolve in the glass. Rather than ‘maximising’ pours I opted to maximise enjoyment. The magic number for me is 6 to 8 people for six bottles of wine. It is the perfect balance of not drinking too much and not getting 50mls of a wine I’ve thought about for 15 years.

Not surprising to most people who have tried BP, I got more yes responses than I had seats. What to do?

Open a second bottle of everything.

This is something that I dread doing with older wine. The fact is that even the best corks can really let you down and a small variation can be a huge issue. I’ve sat next to a wine importer as a guest at a Bordeaux dinner where they opened two bottles of 1986 Chateau Mouton-Rothschild. The bottle we had was so bad that I leaned over to the importer and asked, “is this typical of the wine?” He replied, “There is some variation”. Which is code for, “this was is f***ed but the other one looks great.” Gee, thanks.

On this cold Autumn Thursday, I had to check all the bottles before taking them to the restaurant to avoid any nasty surprises.

At midday I started the nerve-racking process of opening the wines to check them. Carefully slicing the brownish red capsules, the weight of the bottle prominent in my hand and the embossing rubbing on my palm,  I turn the knife around the neck. Only the hum of air conditioning is to be heard. Normally it would be music but, today I wanted 100% attention on the wines. The corkscrew gliding in. The cork still offering resistance. At the last a gentle twist and slow pull. Am I nervous? A little bit, but excited too. The possibility here is endless. Listening hard for the “pfst” that means the cork has done its job. The relief. But not too much relief as let’s be honest, I have 9 more bottles to open and I live in fear of knocking just one over.

Now to pour and check. My lovely Gabriel Glas stands in front of me. Small pour, just enough to coat the glass. Sniff, vibrant, red fruits, leather. Ah, it is good! Taste, silky, rich, an indulgence at lunch time and a reminder that with 9 more bottles I can’t afford to over indulge.

Repeat 9 times. Success 10 times. Lucky, I didn’t have a lot of backups. 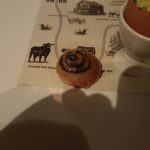 he Venue: Highline at the Railway Hotel.

Highline came as a recommendation from a friend who is a food blogger. I’m always looking for venues that are keen to work together to make a great experience. There are a lot of places that are happy for you to bring in bottles, but few that will try hard to make the experience memorable. The manager, Eric, was very receptive and easy-going. Nothing was an issue and he said he’d cater the four course menu to suit the wine we were having on the night.

Highline is a paddock to plate restaurant. They own a farm in the Strathbogie Ranges called Oak Valley. 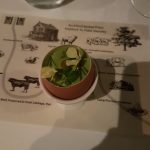 The menu uses as much food from their farm as they can. The food is seasonal and fresh. They make delicious food that is not simple, but not full of wank. The proof of this is that one of our farmhouse treats was a mini Vegemite scroll.

Farmhouse treats – A mini Vegemite scroll and to say an Oak Valley soft-boiled egg would undersell how delicious the egg was. 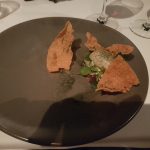 Smoked Oak Valley Beef, Preserved & Fresh Cabbage, Rye – An array of textures and temperatures. The crunch of the kale chips, the cold of the ice cream and the flavours all worked.

Oak Valley Lamb, Broccoli Sprouts, Jerusalem Artichokes, Lemon Myrtle – The lamb was great but the salad with the stock was the winner here. A happy find was the piece of cured meat on the bottom of the plate. So much flavour. 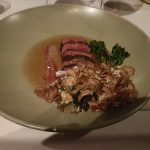 Goat Yoghurt, Fennel, Preserved Plum Juice, Honeycomb – One of the guests said that if you had to have a dessert with Barossa Shiraz (which we did), that was exactly the dessert you would want to eat. And I agree.

We looked at almost everything in my cellar: 2008 through to 2003. We could have looked at 2000, 2009 and a few more recent vintages too; I feel that 10 years old is a great time to look at a wine. You get through all the dumb phases and get a good look at what the wine has the ability to become in the future. 15 years old is where I like to drink my Basket Press. It was settled.

As a guest said, it was a pretty wild ride for farmers in that 08-03 period. Not much rain due to ongoing drought conditions and a few really hot vintages in there too. Lucky that Rockford has access to such old vines that tend to have dug deeper and be more resilient.

We looked at the wines in pairs. In a perfect world we’d serve all six wines at once. But few venues have enough glasses to cover such fanciful requests. And I can’t fault them for that.

2008 – The raw one. Still showing oak and intense red fruits. I liked it for what it will become.  Don’t drink it now. It is not yet offering its full potential.

2007 – The savoury one. It looked about 5-7 years more mature than the 2008. Great! Because you can drink it now. It was my wine of the night and second overall by popular vote. Showing forest floor, roses, secondary notes, leather and game. It still had plenty of red fruits though. Red liquorice, softer tannins and silky mouthfeel. For me, it was the best drink on the table on the night and that is how I choose wine of the night.

2005 – Impressive. It was the blockbuster of the night and was voted wine of the night. The wine you sniff and instantly start nodding your head. Where the 2008 was raw, this one had ‘swag’. It is just a baby, it is well made and showed well. This is a wine that will wow people as long as they drink it. I’m not sure when it will hit its peak, it will be a long way into the future though.

2004 – Perfume. Definitely the prettiest. And probably the 2004 and 06 were the most alike. They are still bold and still Basket Press but with a restraint and perfume that is charming. 2004 was my second most drinkable on the night. It is in a happy place of drink or hold.

2003 – The boof-head. 2003 was hot and dry. In a series of hot and dry vintages it was one that stood out. It was looking its age and drinking really well right now. I will open the rest of my 2003s this year. I don’t think they are going to improve and I want to enjoy them now as I would hate to lose the fruit it has right now.

One wine, six vintages, six facets of one personality.

I did not think that we would see such diversity within such a short band of vintages. I feel like, if it was served blind that most people could see it is the same wine. But almost no one would be able to pick that it was consecutive vintages.

The experience has only served to confirm my love of Basket Press. Who wants to drink the exact same wine each year? Not me!

What Did I Learn?

I’m so happy I invested in great cellaring conditions. Having seen the highs and lows, I would rather not have a cellar than keep wine in sub-par conditions.

Although I had no issues, opening two bottles of everything is far too nerve-wracking. Back to max 8.

Highline is a great venue and I’ll be back.