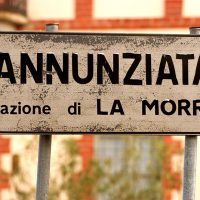 The hills of Barolo and Barbaresco resemble a fluffy doona freshly tossed onto a bed before being smoothed out. There are peaks and troughs, amphitheatres, ravines, steep gradients and flat lands. The face in every direction possible and if there is a piece of land without a road or a house on it, you can bet there are vines crammed in that space.

This land of fluffy doona, often blanketed in fog, sits in the Piedmont region of North West Italy. Near Turino and a short 5.5 hour drive from Burgundy.

The roads in to both Barolo and Barbaresco are completely unassuming. You cruise along freeways and roads of dubious quality and the GPS chimes in that you need to turn right and you’re heading up a steep hill sitting between the vineyards you’re seeking.

In my loyal and somewhat too big for the roads nine seater van on a drizzly, cloudy and cold day I drove to the town of Barbaresco and the town of Barolo. From the top of the hills the sweeping vision of hills bobbing up made me stop for a minute. I’d made it and seen these places with my own eyes and it was unlike what I had imagined or experienced in other vineyards around the world.

I am a huge fan of Barolo and Barbaresco.

These wines made from 100% Nebbiolo are the pinnacle of Italian wine in my opinion. Digging a little deeper into the history of these two regions and it all falls into place. For a long time the locals of Barolo all knew where the best sites were, often it was linked to the families that put in the best efforts in the vineyards but not always, sometimes there were vineyards of such great quality they could not be ignored. But all the wines were sold under the generic Barolo appellation.

It took a local man who spent time working in South America and other parts of Europe Renato Ratti saw how the rest of the world did things. He lobbied to have the Burgundian system of communes being identified, it makes sense because the vineyards of each town were distinctly different, proximity to the river, elevation, aspect… everything that the French call Terroir makes the difference.

Eventually individual sites were allowed to be acknowledged on the label. Renato wanted to go further and introduce a tiered system of ranking the vineyards too but that did not get ratified. What it means for us, the consumers is we can track producer, commune and vineyards. We can follow those that we enjoy and know how they behave through the different vintages. This is the essence of great wine: Grapes from one place, made by a producer with a distinct style. These two personalities married together is what comes through in your glass.

The history of Barbaresco is tied to Barolo.

The lesser known of the two, they historically sold their grapes to Barolo producers or used the Nebbiolo di Barbaresco label. They did try to negotiate their way into the Barolo appellation but the Barolo consortium was not having it. In 1894 Domizio Cavazza, headmaster of the Royal Enological School of Alba who was a Barbaresco resident a lover of the local wines started the Cantine Sociali. A co-operative with nine other locals based is Cavazza’s castle. This was the birth of Barbaresco as a quality wine region.

So they were left to fly their own flag. The Fascist economy saw the Cantine Sociali closed in 1930 but in 1958 the young priest of Barbaresco saw it was the way forward for the local producers to survive. Nineteen small growers, including the now famous Angelo Gaja and Bruno Giacosa founded the Produttori del Barbaresco. Barbaresco was given DOC status in 1966 and DOCG status in 1980.

The wines are now thought of as equal to Barolo but the styles are quite different. Barbaresco is more open the the influence of the river Tanaro and this maritime influence means the grapes ripen about two weeks earlier and tend to be softer of tannin, fruiter and more perfumed. All of this means they are approachable sooner but their life span is equal to the great Barolo.
Barbaresco has three distinct sub-regions: Barbaresco which is the largest area of production and makes the classic Barbaresco style. To the east of Barbaresco is Neive where Nebbiolo is not nearly as important, the style here is more structured and powerful. The last sub-region is Treiso to the South, this is the highest of the regions and makes the lightest, more elegant and perfumed wines.

The styles made across both regions can be quite diverse.

The traditional producers use long aging in large format old oak, generally Slovenian rather than French or American. They make savoury, earthy wines which are compact, with enormous and grippy tannins and firm acidity. Definitely in need of a long time in the cellar to come around. They tend to be brown on release and can look old before their time because of this.
The modernist tend to pick a bit later, use new barriques from France and make bold, fruit laden wines. They still have the huge tannins and they still need a lot of time to come around. But the familiarity of a bright(er) coloured wine with some nice oak makes it attractive for a lot of drinkers.

As a wine drinker, what should you do with Barolo and Barbaresco?

Stick them in your cellar for 15 years.
But how do you get to have a pleasurable experience with them now? There are a few options. Some people double decant young examples 24 hours before service. You can source older wines from trusted sources through your favourite wine guy. And the other option is drinking some of the entry level wines from great producers. I heartily recommend:
Produttori del Barbaresco Langhe Nebbiolo 2014 which is made from 100% Barbaresco fruit into a wine that speaks fully of Barbaresco but in a lighter and less tannic frame.
Renato Ratti Ochetti Nebbiolo d’Alba DOC 2014 is not actually from Barolo. But it is from an exceptional site and has been skillfully crafted into a stunning example of a junior Barolo in the Ratti house style. It will be a pleasurable peak into their style and class without the 15 year wait.

Whatever age you tuck into your treasured Barolo and Barbaresco I will assure you that you’ll need some food. All that tannin and acid will that it’s toll and you’ll need some refreshment. The outstanding news is that Piedmont is the land of truffles and mushrooms. Needless to say that theses are effortless matches often delivered via pasta or risotto (or both). For those not on the funghi train you can equally enjoy beef, or sit on a glass at the end of your meal with some lovely cheese (think in the Parmesan style).

There are some many producers. How do I know what to buy?

That is the easy part. I’ve collected a concise, definitive range of Nebbiolo, Barolo and Barbaresco for you to try. All are tasted and wine guy approved. The range of all Nebbiolo is visible here.

Every time you taste a wine, it is an event. I would like to think it can be educational too. I hate stuffy wine events, so whether it’s a casual tasting or a Masterclass over dinner, I promise a fun, interactive and informative occasion… with great wine. Please take a peak below or view all our events here.

It has been a long time between shared drinks for a lot of us. I have not hosted a dinner since October 2019. I am keen to get out and share great food and great company. How about you?

Let’s not muck around either! Straight to the top shelf. Champagne, Sparkling wine, and three courses (plus canapes). I’m excited to be teaming up with Dakota for the first time, the menu they have prepared is going to elevate these wines to a new level.
Book your seat here.

Your Own Private or Corporate Event @ Any venue you’re comfortable with. Wine is more than just a thing you drink. You share it with people you care about, and you tell stories about the wines and wine places you’ve been. A well-run wine tasting can be an experience of its own. The love of great wine is a concept that brings people together. Sharing it bonds people. This is an opportunity for you to share a special experience with family, friends, clients, colleagues or anyone you want to share some great wine with. Let’s talk about how to make your event special.